My Dino loving boy got a new pair of shorts and our puppy got a matching bandana 😍
Went away for the weekend with my amazing hubby, for a work event he had, and naturally I wore my fave Ogden Cami to his dinner. He wouldn’t let me take my machines 🤣 so I’m looking forward to getting back to it this week. I even got to have a quick meet up and meet a sewing friend IRL for the first time!! And y’all, she brought me fabric !!! 💕💕 @aftonditingo
I’m crazy nervous about posting pictures of this full set on 🙈, but a flat lay just didn’t do it justice.
A pair of just released @greenstyle_patterns #simpaticoleggings and a new #tiebacktank have me feeling super comfy and springy.
I was saving this print for something special, I think my daughters newest top fits the bill. 🤣 She loves her first Olympia from @patternniche ! It is perfect for some crop top coverage or a quick layer for weather changes.
Fabric mail!!

Sewing up the SOS Pants

A few months ago we ( meaning I), decided it was time to go through the kids drawers and closets to see what they had grown out of or had worn out. They were requesting new clothes so I told them they could clean things out and we could make a list of what they needed. Both kids returned with long lists. My daughter had hers all written out and even had fabric requests. My son, had pictures drawn. I’m talking long lists people.

I was surprised. I mean, I knew they had been growing quite a bit, but these lists seemed pretty extensive. So I had them show me their drawers and low and behold, they were pretty empty. This mystery was solved a short time later when I found the piles of clothing they hid, in order to request new clothes. It’s okay, you can laugh, I did. I also take it as pretty special when they were asking me to sew things to replace store bought things, since they like my things better.

After paring down the list to actual needs, it was time to get started,  a few months later. 😂 The first up on my sons list was some shirts. He has a few favorite patterns from the past and asked if I could make new ones just like them, but bigger.

He went fabric shopping and picked out his fabrics. All these fabrics are double brushed poly and from So Sew English Fabrics. 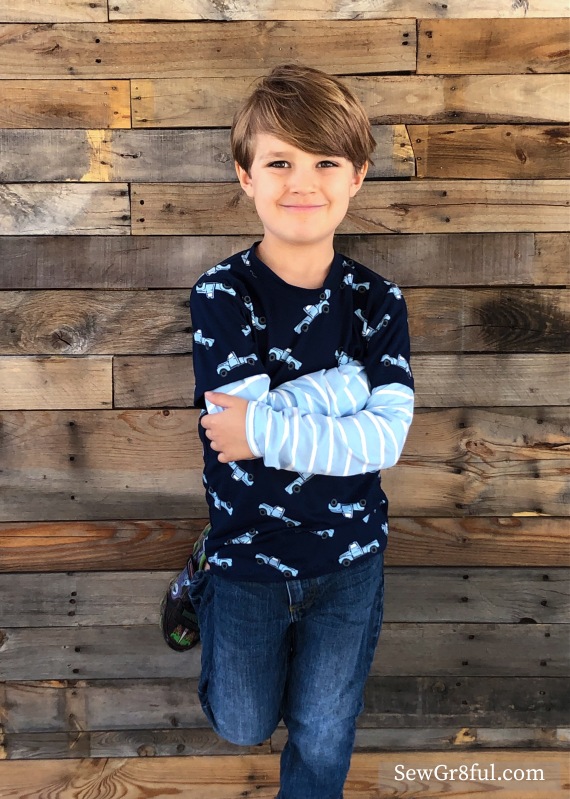 We used the Moto Maxx tee from Love Notions for this one. The pattern has several options and even includes a pants pattern. My son particularly loves the double sleeve look and that is what he picked for this one. He was really excited that the light blue SAM stripe matched the Navy/Aqua trucks print so well. I also did a short time lapse video sewing it up.

His next three picks are all from the same pattern. The Jalie 2918, mens and boys shirt. I love the fact that it has such a large size range. It has been made so many times for my son already, and I see many more as the years progress. 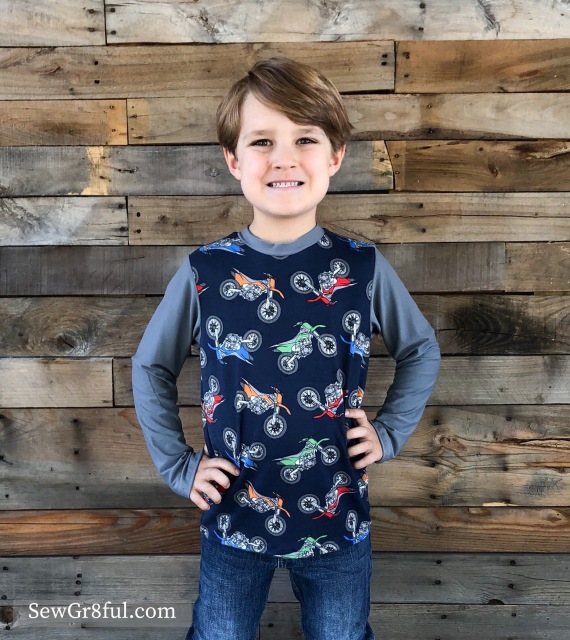 For this long sleeve version, he picked some solid grey DBP from my stash and this deep navy MOTOMAX dbp. With the crazy growth he has been having, I decided to make his sleeves a little longer, in the hopes that it would last into winter. 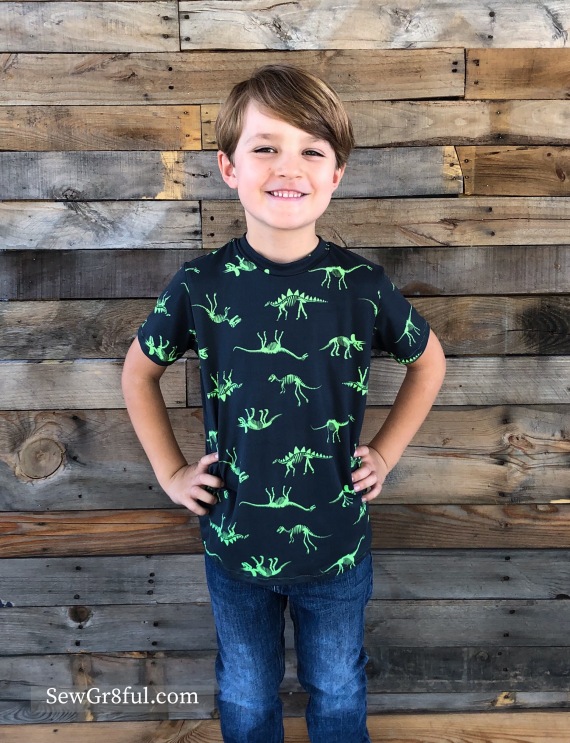 Since it is still pretty warm here, he requested one of his new shirts to be a short sleeve version. This makes it so he can wear it now and later with layers. This one is completely in the deep charcoal/neon green dinos DBP.

If you read my post about our trip to So Sew English fabrics back in April, you saw the airplane dbp and the red/navy vertical stripe dbp my son was given by Amanda. He asked for a shirt from the airplanes and wanted the stripes to be long sleeves with it. It was too hot already, so we did a short sleeve shirt from the airplanes and hung on to the stripes until now.  We had enough left to make his long sleeve shirt, and hopefully enough to make his requested boxers next. The stripes are a vertical stripe, but since the stretch is so great in both directions, we flipped it to make the stripes horizontal. 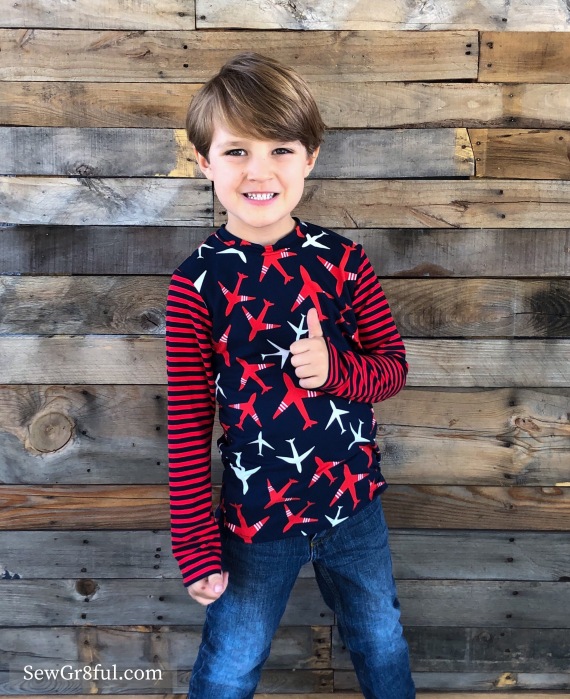 I thought that would cover most of his list, until he put on his jeans for these pictures. Whoops, I guess his list isn’t as short as I hoped. Thank goodness our weather is still good for shorts, it gives me some time to work on my daughters list first.

This post may contain affiliate links. This means if you make a purchase through that link, I may get a % back, at no additional cost to you. Let’s be honest, we all know it goes right back to adding to my fabric stash. All opinions on this blog are my own.